Culture is a unique tool that helps us understand the world, changes one's consciousness and relationships with others; it is an perfect channel to broadcast about the modern life and surroundings. 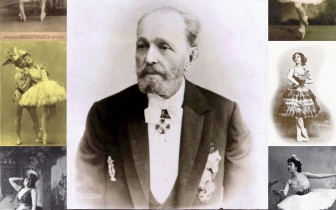 Petipa Marathonis a platform for communication and interaction between theorists, practitioners and performers whose life and work are associated with the name and legacy of Marius Petipa.

Petipa Marathon includes an Exhibition dedicated to the history of life, creativity and heritage of Marius Petipa; the Laboratory - a place for communication between theorists and practitioners, the re-constructors of Petipa's heritage; the Summer program will introduce, teach and coach the top level classes and lessons developing the technique with professionals from the Mariinsky Theatre, Petipa’s former Imperial Theatre and the exclusive repertoire of Marius Petipa will be taught and coached by professionals from the Mariinsky Theatre and by guest choreographers, the re-constructors of Petipa's revival. Additionally this Summer program will include the unique lectures and discussion about the Petipa heritage and ballet history and the closing showcase, the performance of learned repertoire. The Gala-Concert presents Marius Petipa’s repertoire performed by ballet stars and participants in the Summer program, dancing the reconstructions made by various authors.

Petipa Marathon will be held once a year, during two weeks at the beginning of July in Belgium. The best location is Brussels and the theatre La Monnaie where Marius Petipa lived for 16 years. There he received his education, made his first appearance on stage and danced in the ballets of his father Jean Antoine Petipa.

An amazing marathon of works of the brilliant choreographer Marius Petipa has been on display for nearly two centuries, encompassing the entire planet. There is no country in the world that has not heard of the art of classical ballet, and Petipa is certainly credited to be its famous father.

Thanks to Marius Petipa, classical ballet has entered the global cultural niche as an art form. He not only created his own choreographies, as well as famous Sleeping Beauty, Swan Lake, Raymonda, but also carried forth the legacies of other artists who created such ballet masterpieces as Giselle, Coppélia, Le Corsaire and many more. Marius Petipa was born in Marseilles, France on the 11thMarch 1818, grew up in Brussels between 1818 and 1835 and began his career in France and Spain. However, his name is strongly associated with St. Petersburg, where he arrived on the 29thMay 1847, the Russian Imperial Ballet and its school, where he worked for 60 years and created over 70 ballets and dances. He died on the 14thJuly 1910.

The year 2018 was the year of Petipa’s 200th birthday. There were many events held in various locations (Russia, France, USA and Germany) in Petipa’s memory - books published, exhibitions, festivals, concerts, conferences, lectures and open readings held, ballets restored, and a commemorative plaque was installed at Architect Rossi street in St. Petersburg, Petipa’s home of art. In 2019, there was an extensive international archival revision carried out and a lot of material accumulated that should be not be limited to a narrow circle of professional experts.

It is important to share it with the global ballet community, those who dance Petipa’s ballets and variations everywhere in world, and with everybody related to the art of dance and the culture generally.

This is why we have started this project and are asking for your attention and support.